In our series “Interesting Drawings” we plan to feature more than just military vehicles. One example of a vector file that we want to create with decent amount of accuracy is the McDonnell Douglas MD-12 Super Jumbo. Although our Rhino Red Prints portfolio features only limited number of civilian jets, we are very interested in recreating this one. It will be one hell of a drawing!

If the plane looks familiar to you, there is no surprise. Airbus A380 Super Jumbo is based on the same concept. Back in a day, when McDonnell Douglas and Boeing were two separate entities, Boeing had similar plane. Even though they look exactly the same for the untrained eye, they are three distinctive aircraft with many differences. Realization came only for the Airbus A380. However that is already dying out, but nevertheless, those concepts were fascinating! 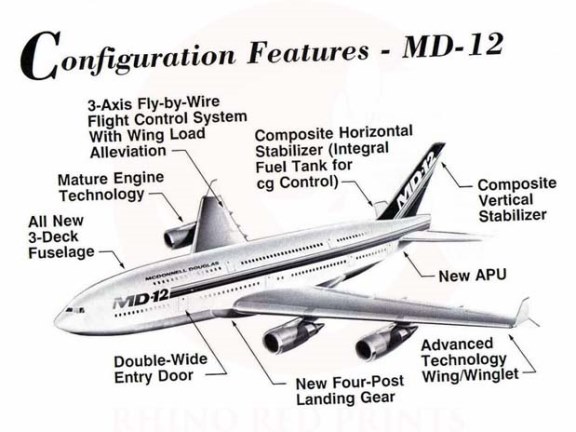 McDonnell Douglas MD-12 started as a trijet. It was planned to supersede DC-10. But then MD-11 came out, and the double decker idea appeared. MD-12 designation was transferred to a two-story whale. Only concept designs were published, nothing specific nor technically valuable. There were no official drawings nor blueprints, just sketches or simplified 3D representations as the ones you can see in this article.

MDD plans were to make the first flight of MD-12 Super Jumbo in the early 90s with planned delivery in the second half of the same decade. However, that never happened. The flying whale was treated like a hot coal and transferred in between decision makers with brisk tempo. Finally, in 1996, the decision was made. MD-12 was scratched due to the financial aspects of the program. Boeing did the same with their plane, focusing on the mid-market, leaving only Airbus to take care of the super heavy planes. And it was a clever decision, because Airbus almost went bankrupt because of their A380. Actually, if it weren’t orders from large companies like Emirates, it would’ve been a doomed bird as well. 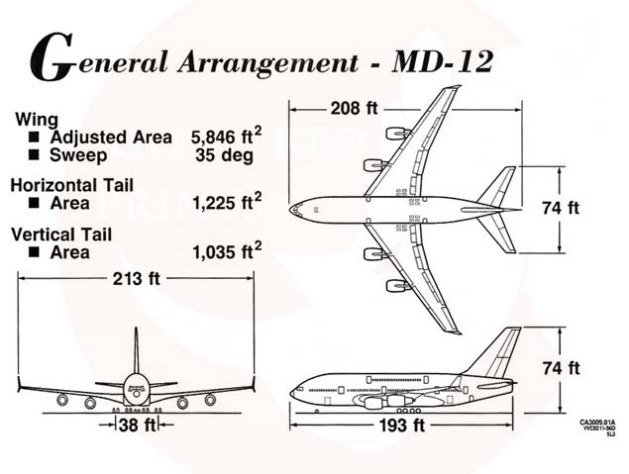 Blueprints and drawings of the three mentioned above are still in high demand to this day. That goes especially for Boeing and McDonnell Douglas planes who never got to see the light of day. MD-12 however, is a special favorite of Rhino Red Prints team and we would like to add that to our list of redprints. Quite unfortunately, there is no sufficient information as with other “unicorn” drawings that we tell you stories about. Maybe, there were no serious MDD blueprints at all, due to the lack of faith in the project. Maybe there are, but they will remain hidden.

We have no idea. But we will definitely consider making this vector file bundle if we bump into the information about the MD-12 Super Jumbo. It is a fascinating plane and it would have been the first among the three. That makes it special. History decided otherwise.